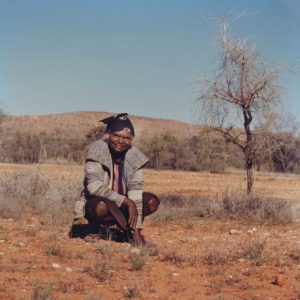 Ada Bird was born in circa 1936 in the Utopia region, located 270 kms North-East from Alice Springs, in Central Australia.  Her language is Anmatyerre and her country is Atnangkere.  Ada was a widow with six children, two of whom are now also artists, June & Hilda Bird.  Ada sadly passed away in June 2009 and is missed by all her family.

Ada was one of seven sisters and these include the well-known Gloria and Kathleen Petyarre and Nancy, Violet, Myrtle and Jean Petyarre who are also talented artists. Lindsay Bird, a highly respected tribal elder and another well known artist, was Ada’s brother in law.

As with many women from the Utopia region, Ada first began to paint using the medium of canvas and acrylics in 1979. Previously, Ada had been involved in the art of batik and was one of the women included in the project of making batik on material, and as a result is featured in the book titled “Utopia- A Picture Story” .

Ada’s work is very distinctive by her use of dot work and colour. Her main Dreaming is “Awelye” (Body Paint) where Ada depicts the various ceremonial designs painted on the breasts and stomach of the women. This style of work was acquired by the National Gallery of Australia and is a trademark of her work. As a senior law woman, Ada was a custodian for many Dreamings which include “Mountain Devil”, “Yam”  “Grass Seed” and “Emu”.  In all her “Awelye” paintings, the designs she paints make reference to her Dreamings and the ceremonial designs associated with them.

Ada’s traditional style of painting involved the use of dot work and in the 90’s Ada branched into a liner design with minimal or no dot work. The overall effect was extremely free flowing and dramatic, highlighting Ada’s great use of colour.

Ada resided at Mulga Bore and mainly painted in Alice Springs where her work was highly sought after by many Gallery dealers and private collectors. Her work has been exhibited in numerous exhibitions across Australia and overseas in Europe, US, Japan and Hong Kong.

2000 DACOU Combined exhibition held in association with AMP- an official sponsor of the Sydney 2000 Olympic Games. This exhibition was held in the AMP building-Sydney.

1992 “My Story, My Country: Aboriginal Art and the Land” Art Gallery of NSW, Sydney, NSW.