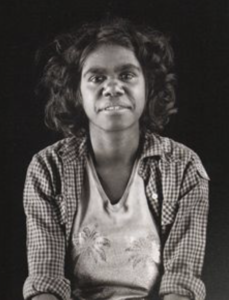 Born on MacDonald Downs in 1964 to Johnny Ngwarrai Hunter and Molly Pwerle Hunter (sister of Minnie Pwerle), Annie now lives with her sisters at Irrultja, a small community of 100 people in Utopia. Annie Petyarre Hunter, is the sister to artists Susan, Jessie, Christopher and Sandy Petyarre Hunter.

Her country is Arawerre in Utopia and her language group is Alyawarre. Her Dreamings are Arawerre Country, Sugar Bag (for honey from bees in a tree hive), Women’s Ceremony, Women’s Cave Dreaming and Caterpillar.

Annie is becoming well known for the fine dot execution of her interpretation of Women’s Business. Like her sisters, Annie is primarily concerned with Awelye (Body Paint) and all it symbolises during the deeply spiritual women’s ceremonies. Annie also paints Bush Tucker and Cave Dreaming in the fine dot genre. Over the last few years Annie has participated in several group exhibitions throughout Australia.

Annie became involved in the Utopia Women’s Batik Group in the late 1980s and one of her batiks was selected for Utopia- A Picture Story, an historic art project and exhibition where the artists portrayed their ancestral stories on silk. These batiks were acquired for the Holmes à Court Collection and the exhibition toured extensively nationally and overseas. The documenting catalogue and reference book, Utopia: A Picture Story: 88 Silks from the Robert Holmes à Court Collection, is an important publication on Utopian artists and their cultural ancestry.

Annie’s paintings were also featured in the significant exhibition Utopia Women’s Paintings, the First Works on Canvas, A Summer Project (1988-89). Annie Petyarre Hunter’s work is represented in The Art Gallery of New South Wales, Sydney and in the Janet Holmes à Court collection in Perth.

2007 Patterns of Power, Art from the Eastern Desert, Simmer on the Bay, Sydney.

1990 Utopia – A Picture Story, an exhibition of 88 silk batiks from the Holmes a Court Collection by Utopia artists toured Ireland & Scotland.