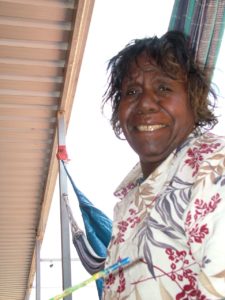 Utopia artist Galya Pwerle’s country is Atnwengerrp and her languages are Anmatyerre and Alyawarre. She is thought to be in her early 90’s although no records of her birth exist, and she has had little exposure to western culture. Her Dreaming is for Bush Melon and its seeds and she also paints ‘Awelye Atnwengerrp’, which refers to the women’s awelye ceremonies that celebrate this bush tucker through dance and song.

Galya begins her stunning paintings on canvas with the patterns women paint on their bodies during awelye ceremonies, paying homage to their ancestors, the land and food it provides. The body painting lines and concentric circles are just visible beneath the rich layers of dots that represent the flowers and fruit of the bush melon. Her abundant and lively dotting in the rich warm colours of the bush allows for mesmerising textural complexity similar to that of the late Emily Kame Kngwarreye, and expresses well the scattering of the tiny seeds into the wind.

Galya is the youngest of the Pwerle sisters, and many of her family members are artists, including her eldest sister the late Minnie Pwerle, her niece Barbara Weir, and her extended family members Aileen and Betty Mpetyane. Galya first began to paint on canvas in 2004 with her older sisters Molly and Emily in a painting workshop organised by Barbara, and Minnie took a close and supportive role in the development of her younger sisters’ paintings. Galya was nominated in 2005 and 2008 for the Telstra Art Award.

Galya is still currently living within the Atnwengerrp community with her two sisters Molly and Emily Pwerle and many extended family members and still enjoying painting.

2008    Group travelling exhibition to major cities of Australia, “EWB Elements”, presented by DACOU in conjunction with Dreamtime Art and Engineers Without Borders.

2005   Finalist for the Telstra Awards