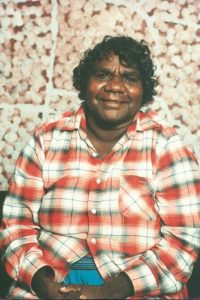 Glory Ngarla was born c.1940. Her language was Anmatyerre and her country Atnangkerre. Glory was a senior woman from Utopia, the younger sister of Motor Car Jim Ngarla (Minnie Pwerle’s husband). Her children are the artists Anna, Joy and Steven Petyarre. She was Gloria Petyarre’s aunt.

Glory was brought up at Boundary Bore (Atneltye). Glory began as a significant batik artist, and her work was included in a major 1988 exhibition and subsequent publication, “Utopia – A picture story” (Anne Marie Brody, 1990). The eighty eight batik works were to be kept together as a cultural record, and included works by Emily Kngwarreye and Ada Bird. The entire collection was purchased by the Holmes a Courts in 1990.

Glory was one of a group of nine women from Utoptia who attended the Brahma Tirta Sari studio of Agus Ismoyo and Nia Fliam in Yogyakarta, Indonesia in 1994. In1995 Ismoyo and Fliam visited Utopia, further strengthening the women’s batik skills. Glory Ngarla’s batiks were exhibited in 1997 at the “Hot Wax” exhibition at the Powerhouse Museum in Sydney as part of the “Festival of the Dreaming”. Glory produced further batiks during the exhibition at the Powerhouse, which are now part of the Powerhouse Museum collection.

A lifetime of painting Awelye (women’s ceremony) body paint designs of bush tucker and animals formed the basis for the batik designs and Glory’s later paintings in acrylics on canvas. When the Utopia women were introduced to acrylics in 1988, Glory transferred her intricate designs to canvas, painting expressive interpretations of her dreamings, Bush Berry, Bush Plum (Anwekety), Yam and Body Paint.

The Bush Plum or Conkerberry (Carissa lanceolata) is known as Anwekety in Anmatyerre. It is a small fruit that grows on a shrub up to 3m tall. The fruit changes colour with the season from green to black, and only appears for a few weeks a year; however the women often dry the fruits, reconstituting them later by soaking them in water. Bush Plum also has antibacterial qualities. *An extract from the bark is used to treat toothache and clean sores and to treat respiratory infections. The women collect and scatter seeds from the plant to encourage regeneration.

Glory’s vibrant, cheerful personality is evident in her confident use of bright, strong colour. This is best demonstrated by her Bush Berry paintings, where Glory makes rectangles with deft strokes of different sized brushes in bright, floral colours, overlaying them with smaller rectangles, repeating the colours in blocks to produce a vibrant harmony.