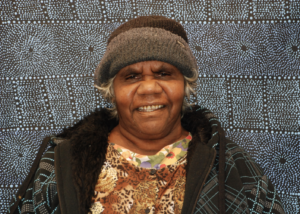 Lizzie Pwerle is an emerging aboriginal artist living in Utopia. Her country is Atnwengerrp and her language is Anmatyarre & Alyawarre. Lizzie has been painting on canvas since the 1980’s and was involved in the batik projects of the 1970s. She is the first cousin to the Pwerle Sisters (Galya, Molly, Emily & the late Minnie Pwerle).

Lizzie paints in two beautiful styles. The first style that she developed on canvas is ‘Women’s Ceremony’. These paintings consist of finely executed dots painted in circular forms and linear patterns that resembles a carefully designed grid. These works take several weeks to complete as Lizzie is a patient artist, returning to work on a new section of her canvas after it has dried.

In 2008 Lizzie began panting ‘Bush Orange Dreaming’ which is depicted by many lines of fine dots painted in a linear design representing the branches of the Bush Orange plant and the country that sustains this important source of bush tucker.

The Bush Orange Lizzie paints is a particular fruit that grows in Atnwengerrp. Once very abundant but now scarce due to over grazing, this species was a stable source of bush tucker for Aboriginals. The fruit grows on a thin long stalk and is larger than a passionfruit. It is green when unripe turning yellow in maturity. It is soft inside and is often compared to the flavour of custard apple. The fruit is consumed raw with the tough outer skin discarded or laid out to dry to consumed during months when bush tucker is scarce.

Both styles are meticulously performed and demonstrate Lizzie’s great skill as an artist, as well as her love for her country. The physical creation of the Dreamings are an important part of the bush tucker ceremonies conducted by Utopia women. Artworks such as ‘Bush Orange’ & ‘Women’s Ceremony’ ensures the continuation of an ancient and rich cultural heritage while acknowledging the close bond still retained by the artist to her country.

1990   “Utopia – a Picture Story”, an exhibition of 88 works on silk from the Holmes a Court Collection by Utopia artists which toured Eire and Scotland.