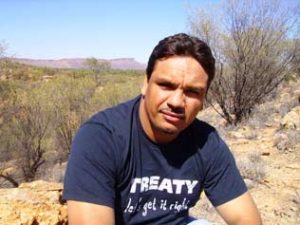 Born in November 1975, Raymond Walters is an established artist from Utopia. Raymond comes from a strong artistic background of well-known artists. Raymond’s Grandfather’s country is Yuelamu (Mt Allan) and his Grandmother’s country is Boundry Bore, Alhalkerre (Utopia). His language groups are Anmatyerre and Alyawarre.

Raymond has adopted a contemporary and very unique style of painting, using a wide range of colours and textures. The creation of his art provides him with an opportunity to share his life experiences and cultural knowledge that has been passed down from his grandparents and extended family members.

This is Raymond’s interpretation of his own Emu dreaming. He paints the front breast of the adult Emu. His mixtures of bright colours add to the uniqueness of his paintings. Texture of Emu footprints and nesting sites, water holes, and other significant sites are sometimes also featured to add another dimension to his paintings. The Emu is an important part of Aboriginal ceremony. It is significant in the make up of the men’s ceremonial dress. The male Emu plays the main role of nurturing its young. This is also an important role Aboriginal men play within their communities

Using a layered textured technique Raymond has created a unique interpretation of his Grandfather’s Water Dreaming. Water is an essential part of life. Tools were used to carve water signs on rocks that signified where water could be found. Raymond uses his fingers to create the Water Dreaming paintings.

Raymond paints circles of various sizes scattered across a contrasting coloured canvas. These circles represent bush damper seed found in Atnangkerre country. The irregular placing of bold lines on the canvas convey the bush damper stem. The seed is collected and crushed into a flour that is used to make damper.