Utopia is located 270km northeast of Alice Springs on the eastern perimeter of the Western Desert ‘bloc’ next to the traditional land of the Eastern Anmatyarre and Alyawarre people. It was named by the first white settlers in 1927 and occupies 1800 square kilometres of desert country. It has an arid climate with low rainfall and long hot summers with maximum temperatures exceeding 40 degrees Celsius. The winter nights are cold with frosts occurring from late May to early September.

The change of seasons, are virtually non-existent with spring and autumn marked by the appearance of wildflowers and fruits, amongst the spinifex and bush scrub.

When white man first settled in Utopia, the Aboriginal people were forced to move away from their clan lands and ceremonial sites to live in the vicinity of the various homesteads. Many Aboriginal men worked as stockmen and Aboriginal women as domestic help in exchange for rations of food and second hand clothing. They provided a cheap but important labour force. It wasn’t until 1967, that legislation was passed allowing Aborigines to be paid as much as their white counterparts.

In 1979, a successful land claim hearing resulted in the community gaining permanent legal title to the leasehold, and it was the Utopia women that played a key role in the successful land claim. Only one year before, the women had learned the art of batik, introduced by school teacher Toly Sawkeno and adult educator Jenny Green. The Batik project enabled the women to establish a source of income in preparation for the land claim hearing. By demonstrating the economic viability of the outstations through sales of their batik, the women justified their legal and moral right to their land.

The Utopia batiks were immediately distinct and featured a rawness and vitality that was a product of both the camp conditions and the women’s attitude to the project.

Their batiks soon captured the attention of various art dealers, and in 1981 Utopia batiks were shown at the Adelaide Art Festival in a major exhibition – “Floating Forests of Silk: Utopia Batik from the Desert”.

In 1987 CAAMA (The Central Australian Aboriginal Media Association) took over the running and finances of the Utopia artists and in 1988 commissioned a number of batiks. Eighty-eight batiks were presented, which then served as the opening exhibition at the new Tandanya Aboriginal Cultural Institute in Adelaide in October 1988. The exhibition later toured to Ireland, and then it was purchased by the Robert Holmes a Court Collection.

In 1988-1989 acrylic paint and canvas was introduced to the artists. An exhibition titled “Summer Project: Utopia Women’s Paintings” (“The First Works on Canvas”) was mounted. It consisted of one hundred small canvases all the same size using four basic colours, black white, yellow, ochre and red ochre. This exhibition was held at the S.H Ervin Gallery in Sydney and the inherent talent of the artists immediately attracted the attention of critics and curators..

The new media of acrylic paint and linen canvas enabled the artists to produce works that were even more distinctive than their batiks. This new medium saw the rise of the late Emily Kame Kngwarreye who paved the way contemporary artworks by other Utopia artists such as the late Gloria Petyarre, Kathleen Petyarre, Barbara Weir, Nancy Petyarre, Ada Bird, Minnie, Emily, Galya and Molly Pwerle. To this day, Utopia paintings are highly sought after and continue to grow in richness and variety. 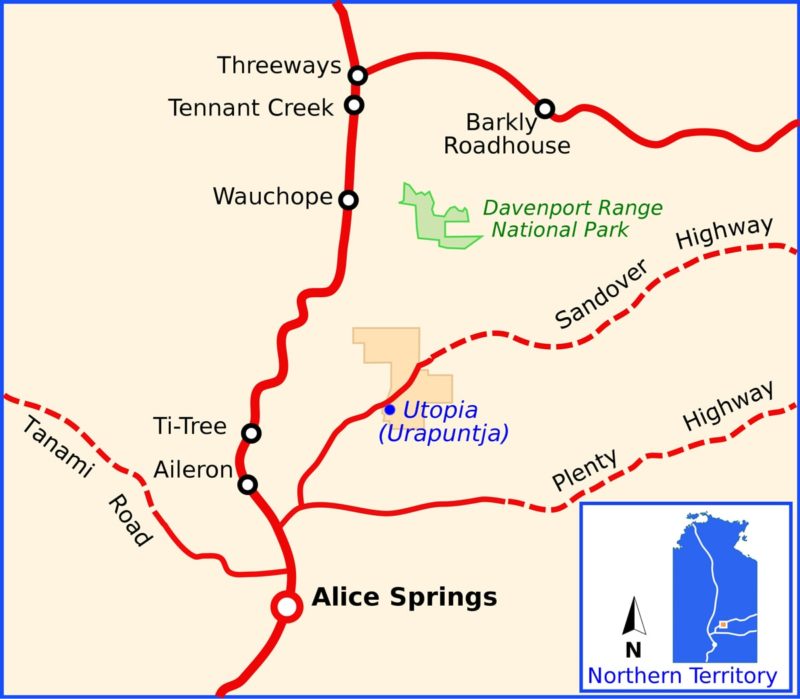