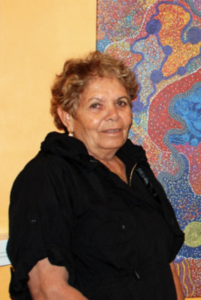 Central Australia’s Barbara Weir has excited audiences all over the world with highly compelling abstract canvases that masterfully evoke a timeless illusion of depth and subtle rhythmic movement. It is an art that is as remarkable in its exquisite expression as is the story of her life. Her journey has been one of extraordinary courage, determination and achievement.

Barbara is one of Aboriginal Australia’s stolen generations. These were people who were forcibly taken from their parents as children and sent to other parts of the country to be raised in European families. This policy was pursued from the early 1900’s to the 1970’s, as part of the Australian government policy to integrate mixed race children from fringe settlements into mainstream Australian life. Barbara’s mother is Aboriginal artist Minnie Pwerle and her father, Irish-American Jack Weir, a married station owner in the Northern Territory.

Barbara’s career as an artist was inspired by the dynamic community of artists at Utopia and the work of her adopted auntie Emily Kame Kngwarreye. Emily’s work had a profound impact on her and in the early 1990’s she began seriously to explore her artistic talents. Highly experimental in her approach, she tried many mediums and in 1994 went to Indonesia with other artists to explore the art of batik. This gave her new insights into her own process and she returned full of ideas on how to develop her own style. She started working with her son Fred Torres  (the owner and director of Dacou Aboriginal Gallery). Initially her painting was largely figurative using traditional symbols such as circles, ‘u’ shapes, wavy lines and dotting to indicate her traditional Dreamtime story. Since then it has evolved to abstraction, a much more expressive and flexible form. Bush Berry, Grass Seed, Wild Flower and My Mother’s Country are her Dreamings.  These are all associated with women’s ceremony (they refer to women’s body decoration for ceremony and the activity of food gathering of local seeds, grasses, berries, potato, plum, banana, flowers and yams).

Barbara uses two distinctive stylistic conventions, one linear, the other an all over dotting technique. For her Grass Seed Dreamings, it is linear (this story refers to the grass seed that is part of the bush tucker found in the region. Seed is collected, crushed to a fine powder and then used to make bread). With these paintings she combines both aerial and side-on view to describe dense fields of swaying grass in close focus. These are both diaphanous and mysterious in impact. Exquisite linear layers of finely painted filaments, they seem at once to be appearing and disappearing setting up pulsating rhythms which are further accentuated by soft plays of flowing colour that weaves gently into and over the canvas surface.

For My Mother’s Country Dreaming, Barbara creates a cosmic feel to her expression with finely executed dots in which float various amorphic shapes, that are more intensely worked. These shapes are the areas where she has over painted to conceal symbols of sacred story that are painted beneath and not meant to be seen. Such areas refer to secret abandoned campsites that people made as they trekked across the country in search of food, women’s coolamons used to collect fruit and berries and/or forms of women’s body that are adorned with paint for ceremony. Sometimes she incorporates the linear patterns to represent women’s body designs – stripes that are traditionally applied to breasts, arms and legs for ceremonies known as Awelye.

At the time of her abduction from her Utopia homelands, Pwerle’s country, some 270 kilometres north east of Alice Springs, Barbara had been under the custodianship of her grandmother Emily Kame Kngwarreye. Emily is one of Australia’s most distinguished Aboriginal Artists. As is the tradition within some Aboriginal families, the grandmother takes personal care of a niece, teaches her natural law and helps in the process of growing up.

Knowing the government policy of the time, Emily hid Barbara from the European authorities, protecting her for over seven years. Barbara was finally discovered at the age of 9 and taken away by Native Welfare. She was then fostered out to various families, first to one in Alice Springs, then Victoria and then one in Darwin. Her family thought she had been killed and over the subsequent ten or so years of estrangement, Barbara had no contact with her parents or family.

Barbara was born at Bundy River Station in 1945 in the Utopia region which occupies some 1,800 square kilometres. Her country is Atnwengerrp and her language is Anmatyere and Alyawarre. Her tribal country is barren red desert with an unrelenting flatness broken only by occasional rocky outcrops. Its harsh arid climate has a low rainfall and long hot summers where the maximum temperature often exceeds 40 degrees Celsius. The winter nights are cold with frost occurring from late April to early September. The change of seasons is virtually non-existent and marked only by the stunning appearance of bright wild flowers and fruits that brighten the soft yellows, browns and greens of the spiky Spinifex grasses, the stumpy olive mulga trees and scattered bush scrub.

In 1977 with 6 children Barbara returned permanently as a single mother to Utopia. Her marriage had broken down. She had long wanted to reestablish her links to her indigenous family and this was the time of her homecoming. Prior to this she had been returning to Utopia each year for short intervals while her husband worked on outback stations. Acceptance by her family didn’t come easily. She had lived totally outside Aboriginal culture during her time away and didn’t know the indigenous languages or the culture.

Barbara says: “My people didn’t recognise me when I went back”.  She was initially treated with reservation by her mother Minnie Pwerle. Her mother’s other three children were not aware they had a half-sister. Her grandmother however came to her aid and through her influence and love helped her successful integration. She says: “ It was lucky Aunty Emily was still around because I would not have stayed otherwise.” Today Barbara speaks the two languages of her people and understands her culture and her Dreamings (tribal law allows her to take these from her mother). She lives close to her family and has earned their respect as an older member of the community. Her traditional life, like that of her family, is an all encompassing spiritual path and way of living based on complex relationships between people and spirit ancestors, animals and the land. (Aboriginal people gain their identity from the area of land where they were born – referred to as their ‘country’. The land nurtures them and in return they are given sacred responsibilities in regard to ceremony associated with protecting and invigorating the land).

Traditionally it is believed that during ‘Creation’, spirit beings travelled over the land creating the landforms, lakes and rivers of the natural environment. When this work was over they then took the form of rocks, waterholes and rivers which today are acknowledged in Aboriginal law as places of spiritual significance. It is this spiritually significant history of landscape that Aboriginal people learn from childhood. Other fundamental relationships of importance are those of their extended family. Their clan and ‘skin’ groups are established by religious law and custom. This is the foundation of a very cohesive social system. Everyone has a place, a relationship with other members of the immediate and extended group and a duty to behave in particular ways in relation to each other. They have defined rights and obligations which must be observed. It is this discipline of traditional life that ensures the continuity of tradition. The emphasis is essentially on community rather than the individual.

In the 1970’s Barbara played a major role in a successful land rights claim in Utopia, and in 1985 was honoured for her work by being made the first woman president of Urapuntja Council. She has a home in Adelaide, a studio residence in Alice Springs and divides her time between these places and regular visits to Utopia where she does painting workshops in a bush studio with her family members.These are informally run by her son and usually extend over duration of 2 days to 2 weeks, and are often attended by aunts, sisters, nieces and other children.

The breakthrough in Barbara’s career came with an overseas visit to Paris and Switzerland in 1996, where at the request of a European collector she was asked to run some workshops. Her work created during that time was overwhelmingly popular with local collectors and immediately sold. With confidence riding high, she became in great demand, doing successful exhibitions in Australia and travelling across Europe and adding further field to Japan, United States, Mexico and Fiji.

Barbara’s first solo show was ‘Dreamworks’, launched in 1999. This was a sellout success receiving national press acclaim with a full  page article in The Australian newspaper on her work. Her second show in 2000 was featured in the 30 minute Discovery Channel documentary “Utopia Revisited’. Today, Barbara travels widely while producing work for a constant stream of exhibitions for different states of Australia. Always pushing the boundaries, she enjoys nothing more that experimenting with new mediums and new forms of patterning. Artistically she is committed to continually seeking new ways to illustrate her Aboriginal heritage.

Barbara’s work is represented in numerous private collections in Australia and overseas. Her work is in the public collections of Art Gallery of South Australia, Adelaide, National Gallery of Victoria, Melbourne, Art Galley of Queensland, Brisbane, the Hitachi, AMP and the Macquarie Bank Collections.  She is now one of the five featured artists in the Australian Tourist Commissions new multi-million dollar overseas television campaign.

In her later years, she has continued to be an incredibly strong role model for her family and community. She has also played an important part in the evolution and promotion of the industry’s sole national body, the Aboriginal Art Association of Australia (AAAA).

2009 Utopia, Colours of the Desert, Gongpyeong Art Space in collaboration with Dacou, Australian Embassy in Korea and Crossbay Gallery, Seoul.

October 2001 At the invitation of the Japanese museum Barbara attended the opening of ‘Nangara”- with all paintings being part of The Ebes Collection.

Sept 2000 DACOU in association with AMP-an official sponsor of the Sydney 2000 Olympic Games, hosted an exhibition of mixed Utopia art in the AMP building Sydney.

Participation in “Dreamings of the Desert” artist in residence program for the Art Gallery of South Australia.