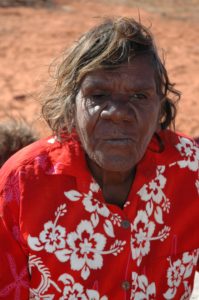 Emily Pwerle’s country is Atnwengerrp and her language is Anmatyerre and Alyawarre. She is approximately 99 years old this year having been born possibly in 1922 (no records exist). She has had little exposure to western culture and only picked up a paintbrush for the first time in 2004.

Emily paints ‘Awelye Atnwengerrp’ with colourful energetic lines and symbols richly layered upon the canvas. These represent the designs that the women paint on their bodies during ‘Awelye’, the women’s ceremonies for Atnwengerrp.

For thousands of years, Aboriginal Women have prepared for ceremonies by smearing their bodies with animal fat and drawing ceremonial designs associated with their country and Dreamings on their breasts, chest and arms using yellow and red ochres often found on their land. The body painting designs vary depending on the ceremony, the Dreaming, the woman’s seniority and time of year the ceremony is held. The most senior women lead the singing and dancing that can go on for many days and nights.

Many members of Emily’s extended family are artists: Barbara Weir, Aileen and Betty Mpetyane, and her older sister, the late Minnie Pwerle. Emily was encouraged by all to paint along with her sisters Galya and Molly Pwerle. It wasn’t until late 2004 that Barbara Weir, Minnie Pwerle’s daughter, organised the first workshop for the sisters which was held at Irrultja station. This inaugural workshop heralded the start of an amazing painting experience. Just as Minnie showed the glorious freedom of expression, Emily, Molly and Galya followed suit. Another workshop was quickly arranged and so it continues.

Minnie took a close and supportive role in the development of her younger sisters. The sisters had an instant response to applying paint onto canvas, developing expressions of their Dreamings that have been passed down from generation to generation. Emily paints “Awelye Atnwengerrp”, meaning women’s ceremony in her country.

“Awelye- Atnwengerrp” is depicted by a series of lines and symbols, often criss-crossed patterns that are layered across the canvas creating an explosive & vibrant mass of colour. Emily has developed her own contemporary style and is proving to be a prolific, energetic and talented artist, akin to her late sister Minnie Pwerle.

Emily boldly uses acrylics on canvas to convey the heightened colours of ochres painted on the women’s breasts for ‘Awelye’ and the colours of her country. They read both as a calligraphic language and contemporary celebration of the ancient wisdom of her culture. She is a prolific and talented artist whose work has been exhibited extensively throughout Australia, as well as in Korea, New York, Pittsburgh and Washington, D.C.
Emily is still currently living within the Atnwengerrp community with her two sisters Molly and Galya Pwerle and many extended family members and still enjoying painting.

See below some of her beautiful pieces we currently have for sale: