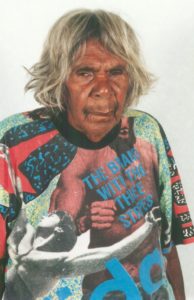 Minnie Pwerle was an Alyawarre woman born in the Utopia region in the early 1920s.  Her country was Atnwengerrp; her languages were Alyawarre and Anmatyerre.  She had five sisters: Margie, Molly, Emily, Lois and Galya, and two brothers, Louis and one now deceased. Minnie was married to the late Glory Ngarla’s late brother ‘Motorcar’ Jim, and together they had six children: Eileen, Betty, June and Raymond, and two other daughters who passed away several years ago.

When Minnie was a teenager, she gave birth to her first daughter Barbara Weir.  The father was station owner Jack Weir.  At the age of eight, considered ‘half-caste’, Barbara was taken from Minnie by the Native Welfare Patrol. Minnie did not see her daughter again until many years later when Barbara returned to Utopia to re-discover her heritage. Barbara is now a well-known Aboriginal artist nationally and internationally.

Minnie did not begin painting until late in 1999. When visiting Barbara in Adelaide, she expressed a desire to paint at Barbara’s son Fred Torres’ DACOU gallery. Presented with canvases, she began to paint a series of linear works with an authority reminiscent of the late Emily Kame Kngwarreye. The finished pieces were bold, vibrant and free flowing. They quickly captured the attention of prominent gallery owners who purchased every canvas Minnie painted. This informal and completely unexpected workshop heralded Minnie’s entrance into mainstream Aboriginal art.

With exhilarating colours and dynamic gestures, Minnie painted two series of artworks: ‘Bush Melon’ or ‘Bush Melon Seed’ which depicted her Dreamings, and ‘Awelye Atnwengerrp’. She was a custodian for her country and her stunning artwork pays homage to her Dreamings, country and ancestors. She draws on an ancient cultural tradition that has used visual gestures and pigments in body painting, rock art and sand painting to express connection to country for thousands of years. Minnie’s canvases sing with indigenous wisdom and contemporary verve.

‘Awelye Atnwengerrp’ represents the ochre designs painted on the top half of women’s bodies for awelye, traditional

women’s ceremonies. On canvas, as in ceremony, Minnie painted mesmerising lines and circles; her U-shapes depict women’s painted breasts.  The lively rhythms celebrate and capture the energy and movements of women dancing and singing around open fires in the soft red sand of the desert.

The iconographic interplay between body painting circles and small round bush melons is clearly evident in Minnie’s vibrant paintings of ‘Bush Melon’ and ‘Bush Melon Seed’. They tell the story of this lovely sweet food that comes from a very small bush only found in Atnwengerrp. Bush melons are green in colour and ripen to brown; once abundant, they are now hard to find due to over-grazing.

Utopia women used to collect this fruit in the summer and scrape out the small black seeds. They would eat the fruit or cut it into pieces, skewering them onto a thin piece of wood to dry for the coming months when bush tucker was scarce.

Minnie lived with her children near Arlparra store at Utopia and continued to paint remarkable artworks until her passing in 2006. She is represented in all of the State Galleries of Australia, as well as in many other institutions and private collections. Art Collector named her as “one of Australia’s top 50 most collectible artists”. She truly was one of the greatest of Australian Aboriginal artists.